Well, now that I write, July was a bit of a silly month for me.
I guess that when I faced it, I couldn’t tell, but it was an important, highly overrated month, where I changed perspectives and mainly organized my life in a massive over-thinking way.
I didn’t move, actually, stayed home, wasting time in front of the window, staring at the boredom.

I beg pardon, a monster called “Android Smartphone” possessed me. I had to try some filters before recovering.

My state of mind, boiling for changes, was always on the starting line, exploding to leave, begging the body to find a solution and let it go. But then, sad reality, my prerogative was slightly different and reality is an ugly beast when it comes to spend most of the day in front of a computer, and not for delight.

So travelling in July was almost like a bit of forbidden thought to talk about, because there were some big tasks in August, because I had to focus on painful administrative works: “stuff to do”. Bummer.
My only escape was a daily trip to the park, not far from my house. I am so thankful that parks exist. It’s like you think you have no alternative, that you are a rat in a cage with potentially lots of possibility but feelings are more like it’s up to your neck in it.

The park is the best creation citizens can have ever imagined in a big city; it’s like going to breathe and suck joy from people, playgrounds, fields and trees there.

My park has a big big green field, and it’s a pleasure to see people, youngsters and adults, playing on it. I did too, I played football one time or two, in a very unprofessional and goofy (but very focusing and sweaty, qualities you don’t even recognise in every football player) way. The way that makes you smile if you think of it. The best way.
The disposition of fields, trees, paths, playground is so rational, excellent job: it enhances the idea of living the place, enhancing the respect for itself too. You see magic, you feel relaxed and empowered.

Stairs embellished by a poem, words by Sir W. Shakespeare

Juggling in the park!

It’s like recharging batteries and I am glad I spent July like that. Less blessing was the crazy Berliner weather, an embarassing show of its I’d-like-to-stay-quiet-but-I-am-nuts-so-I’ll-have-a-storm-followed-by-sunshine-once-every-hour,-stick-with-it-losers! personality. 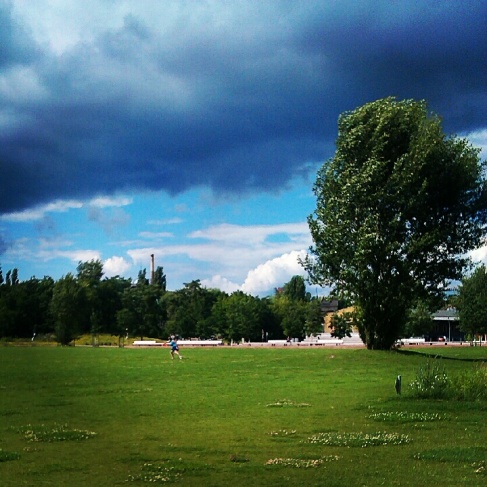 The storm is coming

BUT… yeah, fair enough if at the end of the day, what you see is a simple miracle.